October 28, 2018
All of today's photos came from Angeliki Beyko, the team captain for Magnet Fish Spectacular.

This project is going to be described differently, as mentioned in the first post. Today's post is all about the 2018 IoT Hack Day where the finished product was finalized and judged. From no on, the posts about Magnet Fish Spectacular will have happened before this day, and illustrate the construction of everything. There may be some posts later about taking this project to a Minnesota Maker Faire. That hasn't been decided as of this date.

The rod on the left was going to be the heart and head of the project. 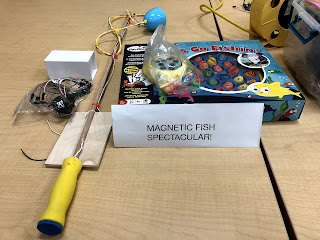 Our parts and inspiration

Part of the planned activities for this hackathon was going to be assembling cloth fish with some patterned material, stuffing, RFID tags, and magnets. The middle of the table became the crafting section with sewing supplies. 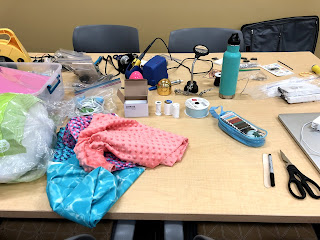 Ryan was our craft master and made the cloth fish his personal mission. As you can tell by his fishy cap, they accepted him as one of their own. I stayed to the far end of the table working to get wire a motor which would spin a platform. The spinning motion was to recreate the old game. 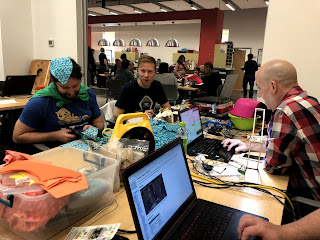 Ryan, me and Doug

During the day, I found myself at the soldering station several times. A couple of protoboards were constructed to fit inside the enclosures and provide adequate places to land wires. In this picture, I was soldering the protoboard which to connected the motor controller and broke out the Arduino pins and some GND connections so switches could be connected easily. 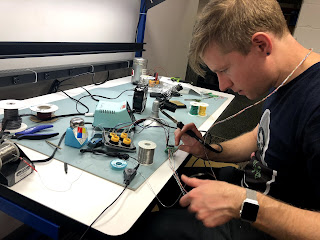 Me soldering a motor controller

Once the motor controller hardware was constructed, which took me most of the day, Greg wrote a program to drive an H-bridge and motor. There were five buttons: START, E-STOP, RESET, SPEED +, and SPEED –. 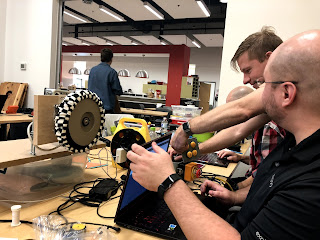 Me and Greg programming a motor controllers

Kim and Doug were working together for the assembly and programming of the fishing rods. I didn't do any of the coding, so I can't say much about it. 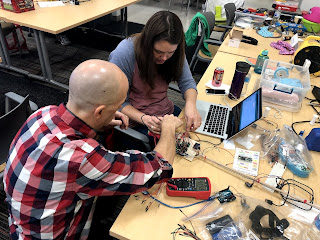 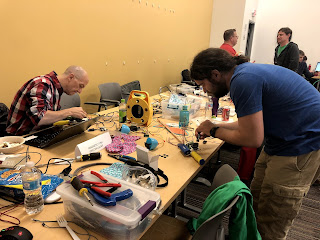 Doug and Ryan working at the table


This is the completed setup. Here, Greg was diagnosing the motor program while I checked the hardware. The problems were in the hardware. Ringing the outer ring of the blue platform was a bunch of cloth fish. Inside that ring were hinged plastic fish. The construction of these fish and platform will be covered in great detail in subsequent posts. 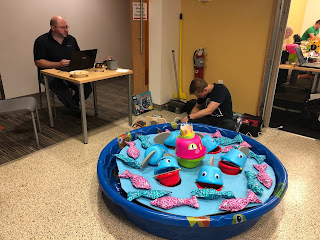 Greg and me working to get the rotation motor working

Kim and Ryan were more than happy to help kids who saw the toy/game and had to know more. 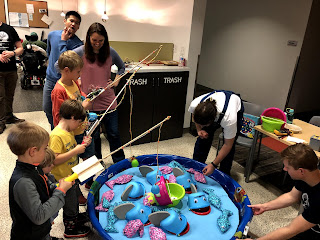 Kim and Ryan helping young fishers while I rotated the platform

Doug came over to show off the update rods and help demonstrate the game to attendees. 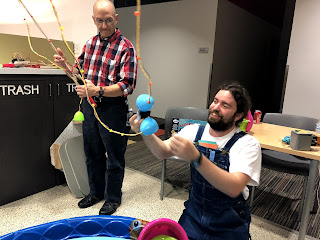 Doug and Ryan entertaining children, and probably themselves

The following image was created before the hackathon but illustrates the materials going into the pool. The bottom layer is a piece of foam which props up some pegboard which holds wooden ramps. Above the ramps is the platform where all the fish were placed.

Layers of things inside the fish pond

Kids flocked to the toy, and they were promptly given fishing rods so they could join the party and catch up some cloth fish. The plastic fish were not playing nice, so they were not a popular target.