October 29, 2018
Magnet Fish Spectacular is the team name I proposed for this year's IOT Hack Day. Since no one is coming to me asking for help naming things, let's move on.

The project was inspired by the children's' toy which features a rotating platform containing plastic fish which periodically open and closes their mouths. The goal is to use a fishing rod tipped with a magnet or bead which is attracted to the fish or trapped by the moving jaw. If you have no idea what I am talking about, search for "wind up fishing game."

Instead of just making a replica, we want to make the fish larger, add sound, be capable of operating in a water-filled pool, and some kind of automated score-keeping. We want to make usable fish before the hack day and do our programming during the day to bring it a functional prototype. We hope to win hearts.

Inexpensive red plastic bowls and blue funnels were purchased with the intent of turning them into colorful plastic fish. They were purchased as a set from a dollar store. 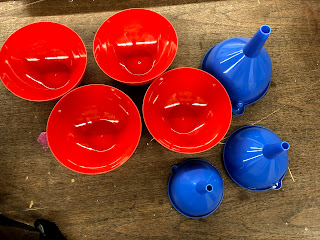 The funnels seemed like the easiest and most logical place to start. They were cut on a band saw to remove unwanted plastic. The cheap parts cut easily, which was one of the reasons for choosing them. 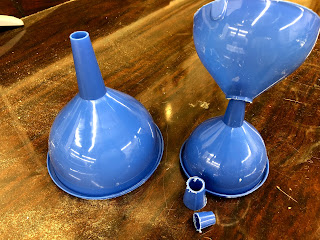 Funnels cut up to fit together

The top of the fish head was made from the largest of the three funnels. Painters tape was used to sketch eyes and make some teeth. Of course, these were decorative but also made it simple to remember which side was supposed to be the front. 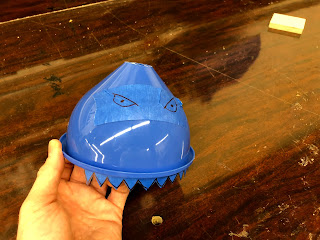 Top of the funnel fish

The smallest funnel became the base or tail of the fish. An inch (25mm) of the nozzle was left intact, so it could hold the medium funnel in place. More painters tape was used to hold these still long enough for pictures. An axle was cut from a piece of scrap metal rod and hinged the two topmost funnels together.