December 09, 2018
Every year, I bring some nerdy present to my second-cousins at a yearly family reunion. The first time, it was a left-over hinge that I had printed at home. The next year it was a printed enclosure for a smart pocket watch. I don't have a record of the year after, but it was a flexible array of printed joints or a tentacle marionette. I have been pretty deep into making keyboards, and it wouldn't be practical to build a couple of keyboards, and the projects are meant to be cute, not that in-depth. Brainstorming led me to the idea that my simple 2x2 keyswitch holders had enough connections to hook up three switches and an RGB LED. A battery holder could supply the necessary power and voila, a pocketable key clicker that changes LED color. The circuit boards were also custom, and I think that adds to the gift.

The steps in this post will cover the best way I found to create this clicker while some of the things I messed up will be ignored. In this way, the post can serve as a guide to anyone who wants to copy this design with one of my boards or their own take on the PCB.

Enough background
----------
Materials were on-hand for this project. Parts to make three clickers were gathered. Three keyswitches for each product, one RBG LED, one 2032 battery holder, and one PCB. These were being built for two of my second-cousins who appreciate science and nerdy stuff and I wanted to build one as a first-run for myself where I could work out some of the bugs. Their clickers would be built with loud green keyswitches while mine would use quiet black switches so they could see the difference but the green switches are much more satisfying to play with. 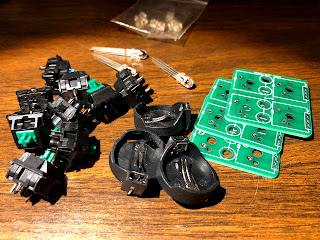 Collection of parts for this project

Simple RGB LEDs, not the addressable variety, are essentially three LEDs in one package. There is one pin for the red LED, one for the green LED, and one pin for the blue LED. Each color shares one common pin for a total of four pins. It is important to keep the pins from touching, and this project involved bending the pins into positions they were not intended to reach. For that reason, the first LED was bent up to figure out where potential overlap would occur and shrink tube was placed in the important locations. 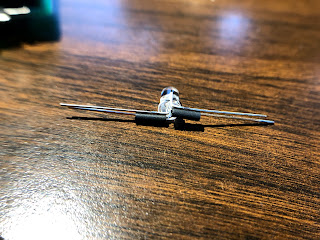 Adding shrink tubing before bending the pins made it a little difficult to bend them into position, but it was easier than adding the tubing after bending. Bending the pins required some careful measuring and a pair of tweezers was used to clamp the wires, so sharp bends were easy. 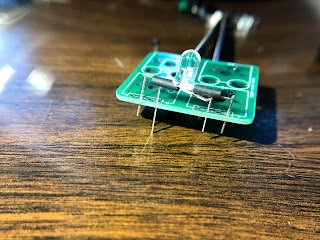 By a happy coincidence, the battery holder in stock, an inexpensive eBay purchase, fit right into a couple of the board's vias so it could be soldered in place with only one modification. The negative battery lead, which went through the S2 via, had to be clipped short so a keyswitch could share the via. 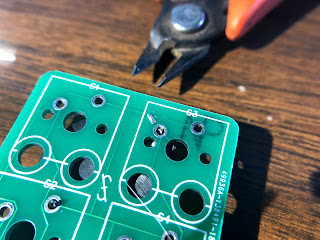 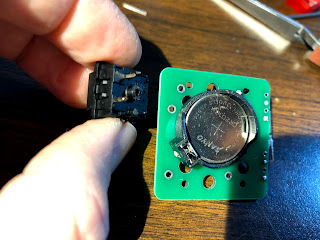 Adding the keyswitch into a via where a battery lead was already soldered meant that the soldering iron had to make contact with the pin until the last possible moment. This led to a damaged keyswitch although it was only cosmetic. This part of the switch would also be hidden by the switch next to it. 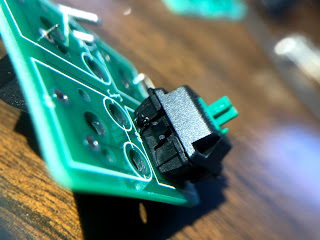 The first prototype showed the path to making two presentable clickers. I am also pleased that I get to keep one of the clickers and that I can build more with this technique. My cousins get the nicer looking square keycaps unless they want to trade for the one I am keeping with round keycaps. They also get a red keycap over the keyswitch which controls the red LED. 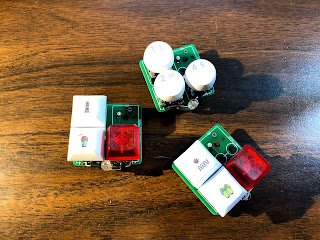 A twelve-second video was recorded to demonstrate the clickers. Care was taken to not press the red keyswitch at the same time as the other two because the red LED has a lower voltage and will prohibit the two other colors from turning on. Perhaps some resistance in the circuit would have prevented this.