May 30, 2019
Pen and paper roleplaying games filled many of my hours and were responsible for many pizza orders hours after the sun had set. It also helped me understand a bit about the nature of random numbers. In my sessions of DnD, a critical hit was scored when a twenty-sided die rolled exactly twenty. Assuming a perfect die, there is a five-percent chance of this. Conversely, there is the same chance of rolling a natural one and suffering a critical failure. This is good for theatrics since one in ten rolls results in something radical happening. A troll may fall on its own sword, or a hero may cut out the heart-stone of a golem.

In reality, such feats are exceedingly rare, and this can be accounted for by rolling two ten-sided dice instead. The odds of rolling exactly twenty are now one percent instead of five. Chances are, most rolls will end up closer to ten. Ten is a safe number if you want to keep a vorpal blade from slicing off the heads of your comrades but less likely to cleave your enemies. Good or bad, this insight into random numbers has come back around.

Enough background.
----------
After listening to prandom notes for hours, it seemed like a good idea to control how much they would deviate from one note to the next. There was no need to put a hard limit, but changing by a full octave should occur less frequently than changing by a couple of notes. Theoretically, the current code has an even distribution of changes which has been producing pleasing but erratic sounds. That can be tempered.

Instead of relying on a single prandom number of zero to twelve, a series of smaller values numbers can be generated and added. The full range will still be intact, but the results will cluster around an average value. Generating more small numbers will cluster around the middle than generating a couple medium numbers. This can be seen in the spreadsheet below. 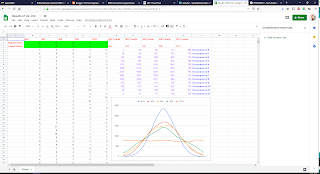 Spreadsheet based on ten-thousand iterations of five different patterns

While making the graph, it helped to think of the prandom numbers as dice with different numbers of sides. Unlike the dice these numbers were based on, zero was also a possible "roll" which meant that zero was a possible outcome after all the numbers were generated. Ten-thousand iterations seemed to be the point at which it was likely to get at least instance of zero and twelve after generating a dozen either/or fields.

A day was spent making these graphs to understand the intricacies of the math involved and to make a nifty graph for this blog. I hope it helps understand why this method was used. Another method would have been to use weighting like Peter Kelly describes. 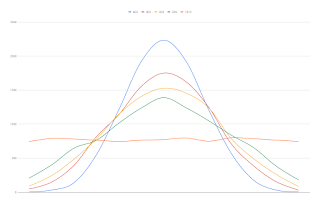