June 12, 2019
The current build of the Electronic Wind Chimes was functional and versatile but bulky. Taking it to a coffee shop, or even the office, seemed unlikely. I wanted to make it easy to test code snippets, maybe the randomization techniques, away from home. This version would use MIDI over USB so it could be powered while transmitting the signal through a single cable. It would not need controls since those could be set in code. Eventually, it could be rewritten to allow changes over the serial connection.

An Arduino Pro Micro was selected since they were stocked and inexpensive. Code from the first version (black plastic case) of the Electronic Wind Chimes was taken since it had nearly all the features necessary without the extra stuff of the second version (clear plastic and LEGO).

All the variables were declared at the amount they were supposed to run at, and any code that updated them was removed. The existing program had to be converted to send commands to the MIDI USB instead of the serial port. Using the USB library meant that no hardware was necessary. At the bare minimum, only an Arduino was needed. 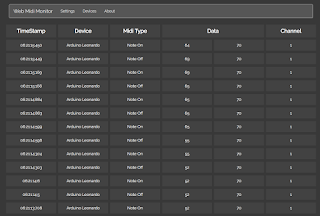 The USB library and Arduino Micro would not work with any other synthesizer, so the synthesizer had to be a computer. This could have been due to the drivers that install when the Arduino connects to a device but may not happen with simpler devices like an Android mobile device. A browser-based digital audio workstation, DAW, provided audible feedback. A Teensy may be used in the future to avoid this compatibility issue.

ElectronicWindChimes_Micro can be found on GitHub.