June 13, 2019
Making a controller with MIDI capability was all well and good, but without some hardware controls, it was nothing more than software running outside of the computer. Adding the most rudimentary controls shouldn't be difficult, and it would not be necessary to add all the operators of the full-fledged version or even the knobs and rotary potentiometers. The Arduino Pro Micro could also fit into a small container. Three thumb-wheel potentiometers and a microSD case were the right size and readily available. 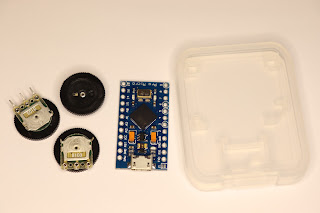 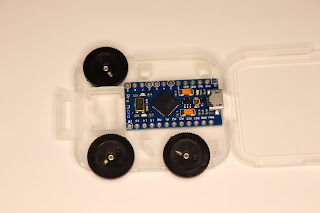 Ground and power wires were connected to the Arduino, but they turned out to be too large and made them unmanageable. After trying hard to make them fit, they were removed entirely. 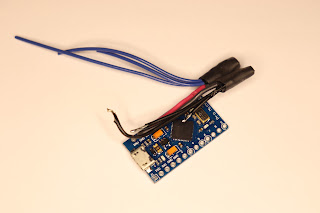 26 gauge wires were substituted. They were small enough that three of them could fit into a single board via. Each of the three potentiometers needed power, ground and a signal wire, so the ground and power terminals were full. Wires were laid in place and cut precisely to length to avoid stray wire. 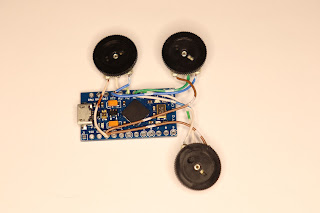 Each potentiometer was given a couple of holes for their mounting feet to go into the case. Plastic along the edge of the enclosure had to be trimmed away with a knife and saw so they could stick out. The hinge end was trimmed away to expose the micro USB connector on the Arduino. 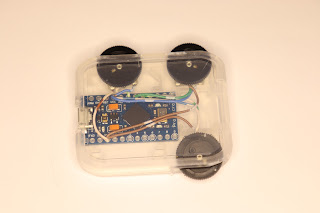 The potentiometers were held in place by their mounting feet and a piece of double-sided tape. It didn't seem necessary to hold the Arduino in place since there was very little room between the backstop and board, but it can move a bit. 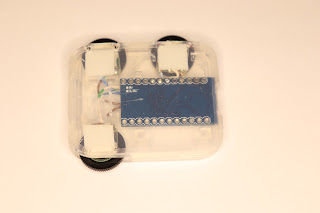 Inputs were programmed based on the ElectronicWindChimes_Micro code, but this version is different because it uses hardware inputs. A browser-based DAW was used to test it, and the hardware controls made it easy to get the MIDI to line up with what the DAW expected. Serial print codes were added to show the channel, note, velocity, range, and tempo each time a signal was sent.

A short video demonstration was made to illustrate the device working in tandem while playing with a drum beat loop found on YouTube.