Many old video games had a common trait where a screen was static, and if characters walked off the left side of the screen, they appear on the right side, and vice versa. I thought it would be cool if the screen were a cylinder and the character never left sight, and we just thought of the screen as a cylinder. With the advent of 3D video games, it is easy to render this for a single-player point of view, but it would also be fun to build.

The obvious downside of a pillar screen is that the player cannot see the backside of the cylinder without mirrors. This can be a component of the game, but the view is wasted, in my opinion. Who knows, maybe mirrors will be a part of the final build or players can ask folks to spot for them. To keep the player focused on their character, the whole pillar will rotate as they move right and left to ascend and descend the level.

Designing a screen like this has been part of the reason I did not start building sooner and over months, the idea has matured and I came up with three iterations for testing the feasibility of lining a cylinder with individually addressable LEDs facing out and covering them with a paper "screen" to catch and display the light.

Enough background
----------
Testing for addressable LEDs onto a diffusing screen was the first logical step in this project so a series of smaller builds was designed to work out some bugs and answer questions before the final build in the hope that it will save time to develop iteratively.

The first iteration will not be cylindrical at all. It will be two parallel sheets of plastic with LEDs mounted between them and facing a sheet of paper. This will determine how quickly the light spreads and figure out how necessary it will be to add focusing lenses to the LEDs.

In the second iteration, a triple strip of LEDs will encircle a cylinder with paper wrapped around it at the prescribed distance, and this version will spin and use a controller. 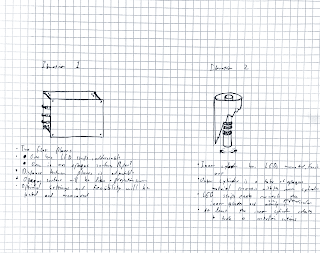 Diagram of iterations 1 and 2

The third iteration should be the final prototype. It will have a triple helix of LED strips, motorization, control, and some kind of game function but the game function may be saved for the hack-a-thon itself. 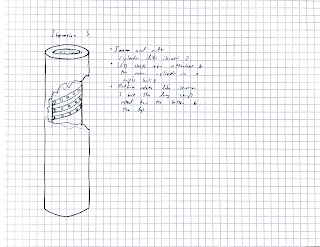