December 21, 2019
Months before I wrote this article, I wrote about a musical bottle organ, and someone in the comments mentioned a different group who made a more involved version. That led to the Haisell organ, which deserved an article, but I waited until bottle organs were not so fresh in everyone's mind. I do not have sufficient knowledge about organ manufacturing to pick out what parts they copied and what they invented. Either way, the builders' willingness to make nearly everything from wood by themselves was awe-inspiring. 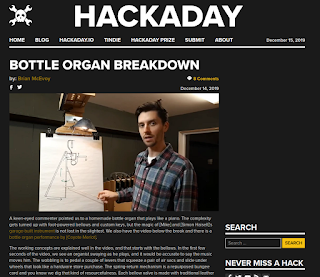 Back on my own home-built instrument, I was having trouble with a solenoid that was not drawing up a key. I thought it was a wiring problem so I troubleshot that for an hour before I considered it could be mechanical. Sure enough, the white plastic piece was not held down with all of its screws, was bowed away from the keyboard, and once I pressed them together, the solenoid and key worked together perfectly.

A little pressure makes all the difference

I was not planning to make a tidy looking enclosure for the electronics. To move this project along, I was going to content myself to screw everything down to a wooden plank and move along. This was before I put in all the work, and by this point, I wanted something pretty to show for my effort, so I reconsidered and drafted the component footprints so I could cut everything out on the laser cutter.

The top layer would have all the operators, like lights and buttons, while a bottom layer would host the relay board, microcontroller, and power components. 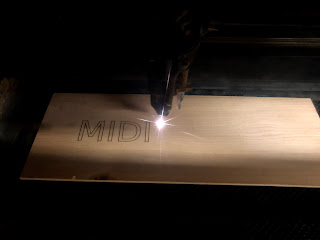 The top layer needed the most attention with ten buttons, an 8-point addressable LED bar, and a MIDI input terminal. The arcade buttons had slide-on terminals, but it was faster to solder wires directly to them. 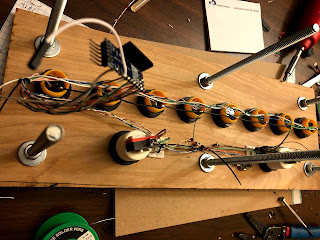 I assembled the layers on 5/16" carriage bolts. The holes in the top tier were cut with squares for this reason. The bottom and middle levels were all circular. Nuts along the shaft spaced everything. The bottom layer, which has the name in large letters, lends structural support and hides the transparent layer a bit. 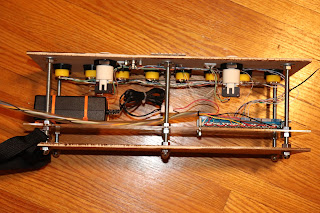