February 25, 2020
Since the beginning, this project had a core goal of making safe electric knives. That sentence might sound ridiculous, but we believe it will be possible to make tools, not toys, that will deliver a shock that will not harm the skin, and without any sharp edges, they won't cause accidental harm by design flaws, like jagged zip ties. One way to keep folks from getting hurt is to use parts from commercial stun guns which are designed so that no one is so badly hurt that they sue.

Enough background
----------
A flashlight stun gun arrived, was tested for a charge, then disassembled.

In the bottom cap, was a power switch and charging port, which can appears on the right side of the picture. From the charging port were two white wires, an LED, and a resistor. The LED and resistor were there to show when it was plugged in. The white wires  went to a capacitor and chip which was likely a full wave rectifier for charging the batteries inside. On the left side of the picture, red potting material filled a plastic cylinder which was a high voltage generator. 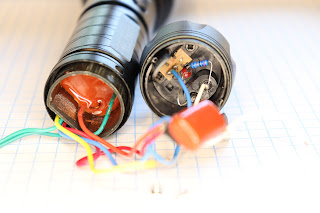 Bottom of a stun gun

The top of the stun gun held a flashlight circuit and light which are of no consequence for this teardown. On the left side of the picture, the battery pack was exposed. It had four cells which each supplied 1.2 volts. There was an empty cylinder to give the battery pack its shape. 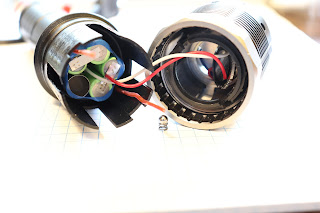 Under the cap of a sun gun 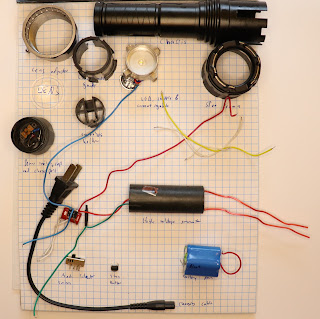 The most perplexing find was the high voltage generator. It had no part number, and it is dangerous to assume it is the same as the one used in the prototype. Since the insides were not exposed, these should be considered different models and not interchangeable. 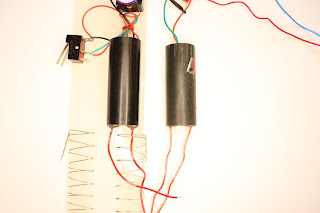 Comparison of the voltage generator