May 30, 2020
Sometimes you can write a macro, and it works right off the bat. Even one that spans a dozen commands might work right off the bat. My current program was on day two. Some of the things I was doing taxed the RasPi processor, so I had to add lots of delays, but I started adding commands to "heal" the spreadsheet. Errors would occasionally erase a critical equation, so the Arduino retyped it on every cycle. It was a strange criterion for programming. 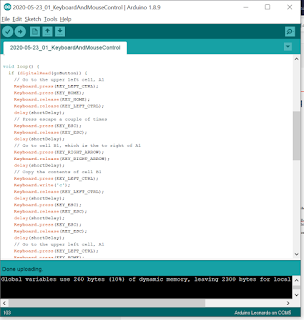 I needed the third day for macro programming. Once again, I needed to change my approach and assume that commands would be lost, and the program had to bounce back. I could tolerate a repeated word or if the voice went silent instead of reading, so long as it self-corrected within five cycles. I got there. The macro should run flawlessly on a fast machine, but it ran at reduced capacity on my low-power computer. 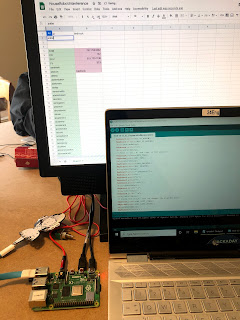 What I have to work with

Even though I put in a lot of work, I decided to venture away from the pseudo-random macro&spreadsheet approach. I already had some solid building blocks, like the word list and voice synthesizer, but the necessary macro was a flimsy card house. I weighed out my other options. 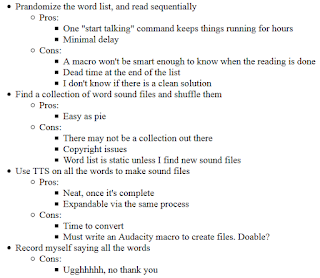 I decided to start looking at a music player to shuffle audio clips from the word list. I didn't need a macro to read the list in order, but the resulting file was over one-hundred minutes long. With 6,800 words, that was shy of one second per word, on average. 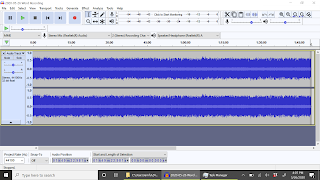 Thousands of seconds of words

With how much this project has leveraged macro programming, I assumed I would need to program a new one to break up all the words trapped in a single stream. Perhaps this was a common task because Audacity had the function built-in. It took its sweet time getting through the list, though. Exporting all the words to a file did require a macro. I looked at making one inside Audacity, but I had to fall back on AutoHotkey to press the right buttons. This time, each one-second clip took seven seconds to export. 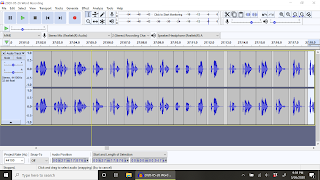 I had all my words saved into unique files. My macro duplicated some words, which means those words should come up more often. It wasn't worth the time to look for duplicates. I started the treacherous road of streaming a window on my RasPi to YouTube, which may be the toughest part of the whole project. I hoped it would be as arbitrary as sharing my desktop inside a video chat, but that was not the case. 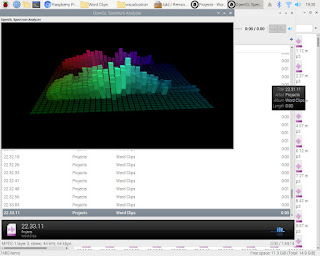