July 25, 2020
To share this with a broader audience, I spent a day adding comments to my code. While I was tidying up, I realized how much harder this would be a month from now. I could have added these while I was programming, but I never made time in the breaks. Maybe next time. 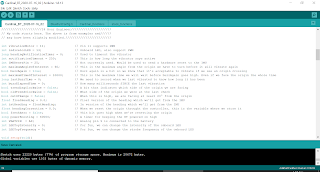 Another thing people will want is an enclosure. Carrying the exposed electronics was acceptable for the proof-of-concept phase, but before I can release this to folks for testing, it should be inside something. In addition to protection, a case will help get the battery away from the antenna, which was messing up reception. I drafted the parts from Adafruit drawings so I could get a simple idea of where everything would go, and it's a good thing I did because the idea in my head would have let the battery leads poke out the sides unnecessarily. 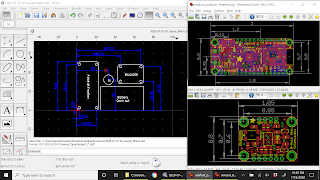 Once the layout was ready, I modeled a plate in OpenSCAD, which had seats for all the demo boards and the battery. I added screw holes at the corners where they would be on the PCBs. 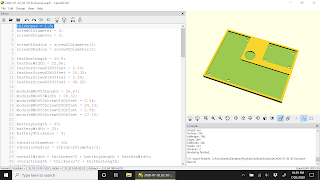 The first print had a couple of problems that promptly fixed and produced a second copy that fit the parts snugly and accurately. I purposefully extended the Z-axis in the slicing software to get a thicker bottom and deeper pockets. 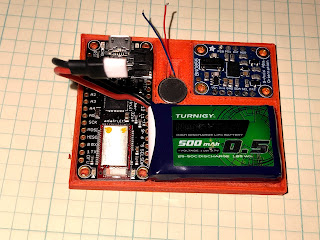 I removed the wires when I disassembled the components, and now that they were mounted again, I had to solder new wires. I salvaged the wires from inexpensive test leads because they were more pliable than the Cat5 stuff I used before. 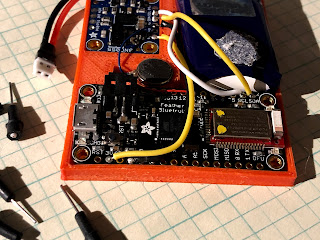 For a lid, I mirrored the bottom to fit like a sandwich with the circuit boards as the fillings. It was a mess trying to find standoffs and bolts to hold everything together. I found out I had some left-hand screws, but otherwise, I only had one threaded option that mated with screws small enough to fit. I'm happy with the result, but it should probably have walls.