Cloud Ouija has stalled out because the laser cutter at my local hackspace is offline for maintenance. I have been waiting a couple of weeks and doing supportive work, but I finally hit a wall. It is coming back, no worries.

Years ago, my friend and I started constructing a near-future world to host a video game. He wanted to code, and I wanted to write. The conceptualizing was great fun, and I never got rid of my notes. Some of them make no sense anymore because my head-canon kept working on it and dropping out details I didn't like. I wanted some harder science fiction than my friend, so I kept the setting to our solar system, while he wished to explore strange new worlds and seek out new life and new civilizations. He helped me embrace some story elements that will enrich the world, and I helped him with some ways to escape Sol.

My friend doesn't care for books that invent a lot of new words, but we agreed there should be rich slang. We both love Firefly/Serenity, so as long as it is used universally and kept in context, it should help pull people into the experience. One of the terms I started using was replacing "gravity" with "gravy." Characters might say they're floating in micro-gravy, or struggling under two gravies. When a character becomes disoriented by a shift in gravity, they experience gravy shock. It rolled off the tongue and it stood out, so that became our working title.

I started this story to produce it as a radio play, so I wrote it script-style. A big challenge was ensuring all the relevant details were passed along in the dialogue. I have never written like this, but I've listened to examples, and I wanted to try it. The biggest hurdle for this book is a non-binary character named Ness. I have paired them with an intelligent but old-school man named Jerry. Each of them has secrets, and I'm looking forward to teasing out the characters. On top of their personalities, they are the only four people aboard a small space shuttle headed to Mars. Their isolation should be ample opportunity to explore the world through stories and educational lessons to the kids. Jerry will bring experience, and Ness will bring perspective.

I started Ness in a micro-gravity travel hub called New Grand Central Station on an international space station called United Peace. Ness realizes that they've arrived late because everything on the station goes on Greenwich Mean Time, and they hadn't adjusted. They have to get to their gate and check-in time to find a last-minute addition to the single-family ship they were supposed to be taking with a couple of kids. Ness was their tutor on the trip because the siblings would be in flight for a couple of months.

I introduced Jerry who was a seasoned space traveler and we find out he belonged to a space militia, but I hadn't gotten much into what he did, or what the group is known for. 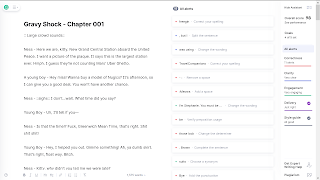 This blog, including pictures and text, is copyright to Brian McEvoy.
2020-12-03