February 24, 2021
I started at the beginning of the document and added descriptions for every panel. A few of them already had some hints, like "apprehensive" or "laughing," built into the dialogue, so I capitalized on those, but they were all based on how a person's voice would sound, not necessarily how they would look. With this visual media, I added props that wouldn't make any sound. For example, I have the young boy an action figure so he'd have something to fidget with, but a couple of panels later, we see it floating, so we know the ship is not under thrust.

Houseboat living space is a high premium per square foot, so I decided the spacesuits would be stowed in the couch and chairs since they are only supposed to come out a couple of times. Jerry's storage space is empty. Earlier, Jerry pointed to a patch on his backpack, but I had to remove that since it happened during launch when they needed to have all their belongings in storage. I added the logo later as a sticker on an old bottle of whiskey.

The most significant difficulty was a paragraph where Ness tells Jerry about the term "non-binary." A lot of their conversation revolves around this concept, and as a cis man, I can only say so much before I put both feet into my mouth and keep going. I decided to stop with what I'd written and move on until I bring in a consultant who can do it justice. 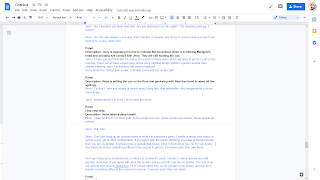 This blog, including pictures and text, is copyright to Brian McEvoy.
2021-02-20