August 31, 2015
Printed servo lever arms were attached to ordinary servos. Coincidentally the thickness of the lever arm was very similar to the thickness of the servo horn hub thickness which made for a flush piece. A single screw was used to attach each servo horn to a lever while the old design would require two screws per servo. One servo was placed in the wrist mount piece but not screwed down. Two versions of the servo levers were printed, one attached to a servo while the other had ends meant to hinge on a bolt so they were simply open holes. Those holes needed to be drilled out in order to fit a #6 bolt. 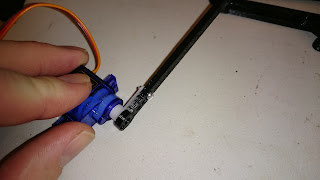 Old style which attached to top of servo horn 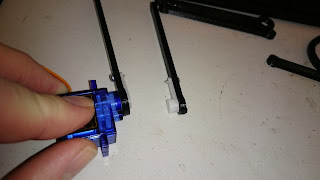 New style which wraps around servo and attached to underside

Half of the levers and servo were assembled before animation and video were taken. Animations show the way the four bar linkage will move something from a forearm position to a palm position. As a simple demonstration the continuous rotation servo made on 2015-08-23 (Su) was also connected to the same servo signal to demonstrate how the two act differently despite getting the same signal. Video was shot which first demonstrated manual movement where the signal was changed according to the potentiometer which can be seen as it was turned. The second part, at 23 seconds, showed the neutral position where the continuous rotation servo is halted and the unmodified servo snaps to an odd angle. The final part of the video, at 27 seconds, shows automated movement where the shuttle moves back and forth and the continuous rotation swings around and around in both directions. This final movement was also captured as animation shown below.


Video showing Four Bar Linkage and the difference between servos
While watching YouTube videos it's possible to skip around by pressing numbers on the keyboard. For example, to go to the beginning press zero, 0. To go to the exact middle press five, 5.
To skip immediately to the second part of the video, where neutral position is demonstrated press six, 6. To skip right to the automated movement press seven, 7. Press zero, 0, to rewatch the whole thing.