September 02, 2015
Someone could make the point that when a servo is converted to continuous rotation it is little more than a gear motor. This is true for the most part. Gear motors, which usually reduce speed and increase torque, are expensive because they are larger than I want. It wasn't documented here but I also gave stepper motors a try because they would have been easy to mount and relatively easy to control. In the end I decided to use modified servo motors because they are inexpensive and they can be controlled with a single wire from a microcontroller.

Two servos were selected to be turned into continuous rotation servos. Each was opened up and modified by the working techniques from 2015-08-23 (Su) including a 50kΩ potentiometer but this time the potentiometer was attached to the servo at the location where the wire exits the servo instead of the face opposite the top gear. In other words, the potentiometer is on the wire side instead of the bottom. One of the servos had trouble keeping the insulation over a wire so all three wires were replaced with salvaged 26AWG Ethernet wires. The larger Ethernet wires were more difficult to position due and the hole which normally only had to pass the power and signal wires was filed out to accommodate the large wires as well. When the regular potentiometer wires were run out the hole with the power and signal wires there was no need to expand the hole. PCB mounted potentiometers were used and had no protection on the back so moving parts were exposed. For this reason glue was not used to hold the potentiometers in place. Tuning the potentiometers was also difficult so they should be replaced with enclosed multi-turn potentiometers. 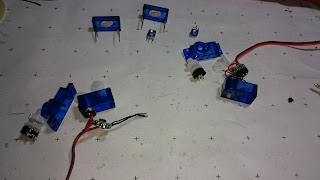 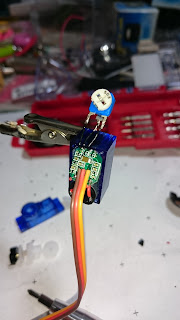 50kΩ attached to outside of servo case 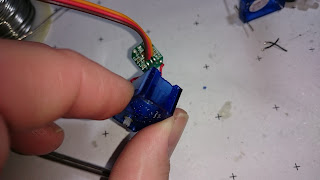 Edge filed down to allow larger wires to pass through case