February 16, 2016
One year after I got my first engineering job the boss took the whole company of five people to lunch to welcome the new engineer, Roger. Two of my coworkers had spent the previous night slicing cranberries in half to make jam and our engineering brains started cranking.

Before the lunch was over Roger said that he had ideas of a specialized grasping mechanism which would hold the cranberries on each side and pull a knife through the center which should perfectly bisect the berry. The grasping mechanism would then drop the sliced berry and start the process over.
This automated process would continue until all the cranberries had been sliced neatly in half.

My brain took a different approach. My solution was to scoop up a cup of cranberries and shuffle time onto a piece of 90 degree angle iron. Angle iron forms a right angle and the hardware store sells it in lengths by the foot. Once enough berries were in place a pizza cutter could be run down the center and cut a few dozen berries at once.

Let’s look at the mindset of each invention.

Roger wanted to have a berry that was cut into a neat hemisphere each and every time, was a repeatable process and could be automated. His invention closely imitated the process used by people working in a kitchen. His invention could have been used in a pharmaceutical application because the tolerances could be on the scale of micrometers.

My invention could have been built after a single trip to a hardware store, many of which sell pizza cutters. It still required a person to do all the work and it involved steps which required significant dexterity. This was not automation, or even an invention, this was simply a kitchen hack.

Everyone at the table was impressed by Roger’s ability to conceive a device which would make the tedious task automated. Similarly they liked my idea for its simplicity and the fact that it could be implemented without much planning or a budget to build Roger’s machine.

If this discussion had happened in front of a customer, maybe a pharmaceutical customer, my idea would not have even been spoken. But, given the audience, my idea was a clear winner.


This compass invention has become too bulky. There are too many ideas in my mind to clearly remember what it’s supposed to do an I’m tripping over my own brain. If I let the idea rest again, which helped immensely last time, I hope to approach with the techniques and designs I learned this time but when I can get clarity by distancing myself from it. Letting the smoke settle, so to speak. I haven’t given up but I have run out of steam. When some of the nonsense falls away I want to pick this project back up.

The base and jar were glued together since that was a source of unacceptable rattling. The sides could have been padded and held securely in place but it seemed more logical to simply glue the pieces in place and reprint when necessary. The spinner was reprinted yesterday but it was an identical spinner to the day before so it was unnecessary to reprint the it and glue more magnets to it. The new spinner was used with the O-ring from the previous model but no noticeable difference in performance was noticeable. 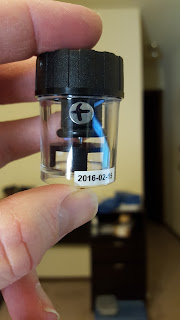 Moving the lid’s protrusion toward the rim, away from the hub, didn’t make any significant difference in overall performance. This was disappointing. A hole was drilled on the opposite side of the hub to the protrusion to make a socket for a small screw. 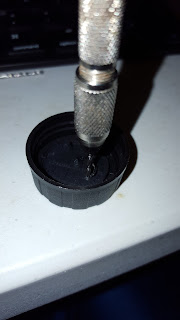 Drilling a hole in the lid

A small brass screw was placed in the new hole to make a protrusion which stuck down significantly further than the cone meant to hold the spinner in place. Despite these attempts the compass would not make north-facing collisions any more noticeably than other directions. 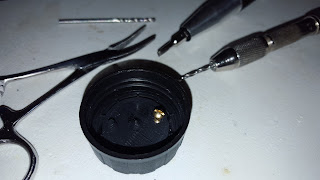 Brass screw in the lid