October 26, 2016
I don’t like screwing up. For one, it slows the process of a project. Secondly, messing up doesn't make a fun blog post. But today, nothing went right for the Clockwork Theremin except for one thing. Fortunately, that one thing, inspiration, was probably enough to carry the whole day.

Plans for a low-profile gear hub had been developing for days. It was becoming increasingly important to decide on a design which would not be so bulky that the gears would be forced to different planes. Making the gears lie on the same plane is vital for them to function and small deviations could cause the system to fail. Creating the spoked hub was one method for helping the gears mesh neatly.

While writing yesterday’s post it occurred to me that the gear doesn’t need to spin on the shaft, it would work equally well if the shaft could spin. In skate parts, like longboards and inline skates, the axle is stationary and the wheels spin on it.

The program for the spoked hub was used and a model was created without spokes which would mount to the backboard. A spoked hub could have been used but it seemed like a waste of plastic.

After the IoTHackDay all the printer filament was used up. Three more cartridges were still in stock. Here is where the problems started. Two of the three cartridges were PLA, which hasn’t been used in the printer before. It was a branded cartridge meant for the printer. As soon as it was loaded the printer warned that it could not be used until the nozzle was upgraded. In other words, the manufacturer failed to advertise that the cartridge would only work with the purchase of additional hardware.

One cartridge of ABS was handy so it was unwrapped and installed into the printer. This print started nicely but after running for an hour the printer emitted awful sounds which meant the stepper motors were skipping. This can be caused by a jam in the machine or when the print head is wrapped in the electrical wires. After investigating, the culprit was the printer cartridge. The coiled filament was tangled in itself and wouldn’t allow any more to be drawn out. As the tension increased the printer became confused about where the plastic was supposed to be and the print was finally canceled.

It was a bad day for projecting and the ugly tangle of printer filament will have to be put on an external spool, like that used on many other printers, until enough filament is gone to fit inside the cartridge. 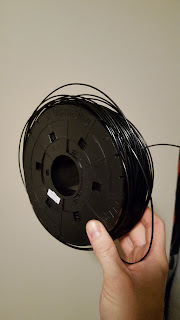 Ugly mess of a filament spool 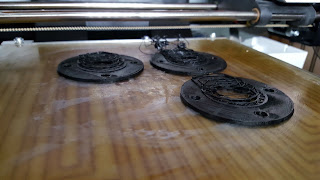 Ruined prints. Notice how the rings keep getting farther from center