April 05, 2017
When the day started, it seemed like it would be an easy task to get the transmission working on the tagger. Often, combining two pieces of code is a matter of where to place them and when to activate them. I found this wasn't the case here and it became a long day.

Example code in Ken Shirriff's infrared remote library placed the code for sending remote signals into a different example than the code for receiving signals. Combining them caused the reception portion to stop working and the transmission didn't work to begin with.

The solution finally came after reading deeply into some of the posts and discovering that it was necessary to change some of Ken Shirriff's code. In the "Arduino-IRremote-Master" directory I changed line 87 and line 89 of the boardsdef.h file. Line 89 was commented out and line 87 was uncommented. This had the effect of changing the transmission pin, previously 3, to pin 9.

The picture below shows the current state of my boardsdef.h header file. This was only necessary because I was using an Arduino Micro with a 32U4 controller. 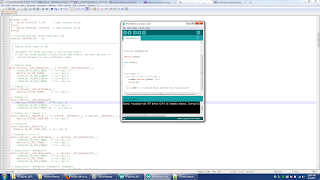 Transmission was finally taking place. A resistor was also added to the IRLED to keep it from receiving too much power. Transmissions can be seen in the animation below. Each blip of the LED is a burst of 8 bits plus any header and parity provided by the IR library.

Another vital piece of code was found which kept the code from receiving after a transmission. The line was posted by Ken Shirriff himself in a forum. Once it was added there were no more issues with sending or receiving.

A second computer had been running an older version of the code which simply printed all the signal it received during the evening. This was periodically receiving signals from the handheld remote and the newest code which was transmitting the HEX code with the Sony protocol which was right out of the IRSendDemo example code.