May 02, 2017
Output pins on an Arduino do not provide much current. They are limited to 20mA which is enough to power a small mechanical relay or several indicator LEDs. In some cases, this is great news because applying 5V to some LEDs will burn them up in a second or two. However, if something more substantial needs power and control an interposing device must be used. An interposing device can be a mechanical relay or a solid-state relay but very often a humble transistor is the best choice. Some of the outputs in this circuit need more power than the available 20mA so transistor circuits were designed yesterday but they needed to be built and tested.

For comparison, four identical LEDs were added to the two breadboards. The board on the left used the transistor circuit while the board on the right pulled all the power through the Arduino. 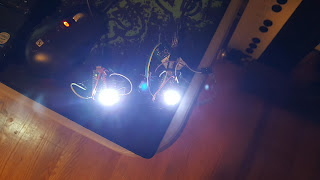 Differences between the outputs were not as obvious as I had hoped. The transistor circuit does take strain off the Arduino, which should increase longevity and reliability but the bare IO pin did a good job of supplying power. Due to the low cost of the transistors, it seems like a logical choice to keep them in the circuit. 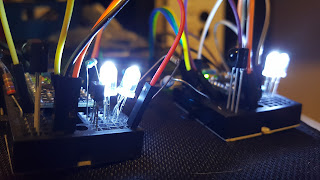 Close-up. The transistor can be seen obscuring the left-most LED

The resistor values used to protect the LEDs on the transistor circuit were a guess at first. After calculating the ideal value brightness increased again and on a whim, a short was created for no resistance aside from the transistor. This dramatically increased the brightness.