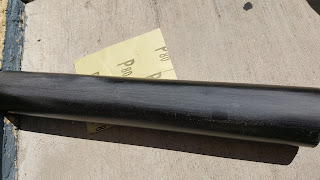 Pipe with worn off letters

On a guess, acetone was used to smooth out the scratches. A paper towel was soaked and wiped up and down the pipe over the scratches. After a couple seconds the paper towel began to stick to the pipe so it was removed and the pipe was doused with running water. All the scratches were gone and it left a glossy finish. This worked much better than expected. 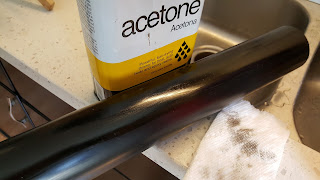 Wide masking tape was applied to the top and bottom of the pipe along the length. It was not aligned with any care. The alignment tools printed before were placed in each end of the pipe and a yardstick was used to trace a line down the length of the pipe on either side. A (n occupied) cat bed was used to prop the pipe while taking the photo. 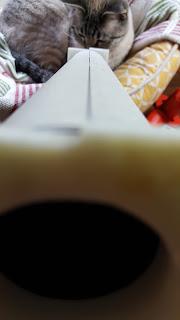 All the necessary holes were carefully marked and measured. A diagram will be made which describes the location and diameter of each hole. Two large holes were made for the PCBs and for the first time they were planned and made it unnecessary to use a long printed PCB holder. Those holes will be described as well. 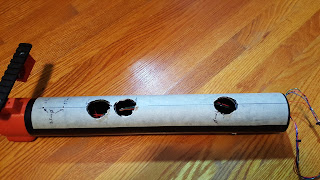 Top side of tagger pipe with drilled holes

The holes drilled for the PCBs were connected using a jab saw instead of holding a bare hack saw blade. Once connected, the holes were more than wide enough to accommodate the PCB but it is unclear if the components on the board will also clear the sides. 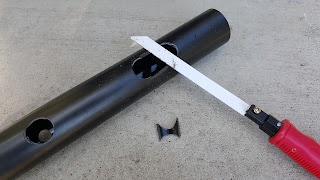