Our thirtieth episode was unique because Tim and I both tried a nootropic. I have been straight-edge my whole life and I still consider myself straight-edge since NMN is not a recreational drug or even a controlled substance. Tim and I weighed in on our experiences with NMN after we had taken it for a month.

Changes were made to some of the models. There were a handful of changes just waiting to be done and I finally got around to making them. At this point the changes have been pretty minor so doing three models in a day was not a big deal. The parametric modeling meant that finding the correct variable was the hard part while finding the best value was easy since the changes reverberated through the model.

Narrowing the diameter of the handle

Removing 1/3 of the spacer ring 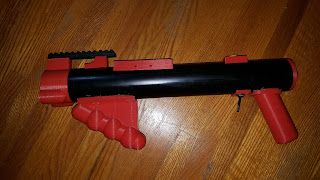 The second revision of the infrared sensor boards arrived. These boards were virtually the same as the previous version except they had the copper on the underside instead of the top. This meant that the first boards were difficult to solder the infrared receivers but the second version was easy. The first version boards will be kept around as spares or given away. 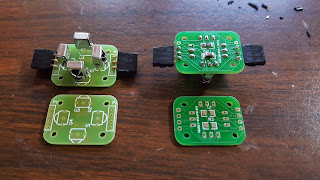 Publicizing the circuit boards was a one-day job. Public pages on EasyEDA were cleaned up and Gerber files were downloaded, compressed and linked at the bottom of the PiTagErrUs blog posts. These boards should make it simple for anyone copying the project to make their own easily and cheaply.

A project page was started on HackaDay.io which will give concise instructions for making taggers. In the past, Instructables.com was used but this project is outside the typical demographic for Instructables but it may be copied to there at some point. Photos from this blog were collected and categorized according to which step of the process they should be in. 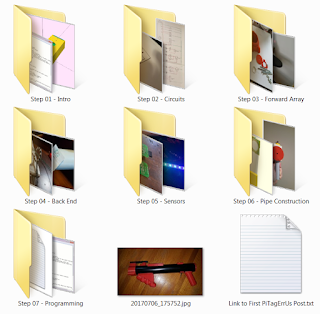