November 05, 2017
2xCb+Mic
Show page
Episode 038 was a return to our usual format of Tim and I talking. We diverged from talking about the technology and instead, we talked about people who were augmented and relied on those augmentations for their jobs. This strayed into a gray area with medical cyborgs who relied on implants and augments to allow them to perform at stock human capacity.
Check out episode 038.

It occurred to me that not everyone reading this blog is willing to read through all the previous blogs in order to catch up to the current day and there are a lot of past blogs about Charged: DesertIrish. To help people understand what is happening, I wrote an introduction to Charged: DesertIrish which encourages people to start the story and it gives some background about why I started and what makes it important to me.

For everyone reading along, here are the spoilers for the week.


Dawson and Roller Derby were instructed by Jason to lure the pursuing ONYX car into a trap outside of Montgomery. This actual location was found with a satellite-view map and happened to be perfect for the setting. In real life, it was a turn which could be taken quickly followed by a circular gravel driveway.

Once ONYX followed Dawson’s car onto the driveway, Jason used his artifact to stop the car just like it was hitting a wall. It is then revealed that Liz came along and she promptly dispatched of the ONYX driver in a slightly gruesome way. The two other ONYX men escaped on foot.

Vani brought everyone back to Minnesota, including Roller Derby who was still in a hospital gown. Dawson’s car was returned to Minnesota to avoid suspicion. They appeared outside Motor and Head’s house but Vani quickly brought them inside the house since Roller Derby was not dressed for cold. Inside, Heather greeted them and Liz was in rough shape, mentally.

The OpenVectorKB was given a software upgrade to add functionality for VLC media player. A narrated video was recorded which outlined the functions of the encoders and buttons. The upper left knob, usually magnitude/precision, acted as volume control for VLC but not the system volume. The top knob, x-coordinate, moved the time slider one minute forward or backward. The middle knob, y-coordinate, adjusted ten seconds at a time. The lowest knob, z-coordinate, adjusted three seconds at a time. All the time adjustment knobs could double their effect by pressing down while twisting. Buttons were reprogrammed for play, next, and previous.

Boredom and bad coffee are easy to find in a hotel room. Instead of lamenting the cheap coffee maker and oh-so-standard beans, a little ingenuity was employed to make a better cup of coffee with implements and materials found in a hotel room. Cold-brew coffee was made with the proprietary pods found in hotel rooms and bottled water or tap water. Clean-up was easier than many other cold-brew methods too. 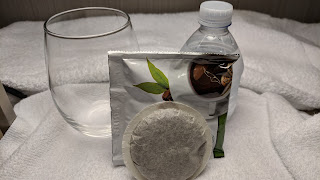