April 13, 2019
Electronic music has not been far from my mind, and when I saw a MIDI piano made on a DIY circuit board with capacitive buttons, I was curious. The whole thing was made so there were no moving parts, which may not make for the most practical piano, it was a novel idea. 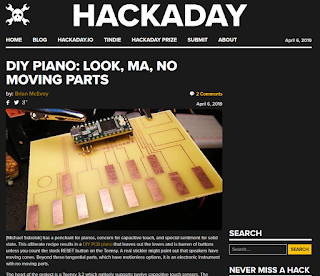 Months ago, my girlfriend got me a couple of NFC locks from IKEA. We were intrigued by them because we both have NFC implants that could trigger them. It took me a while, but I did a teardown with the grinder mentality and figured out that it should be possible, even easy, to move the NFC antenna around and make it more effective at scanning an implant. 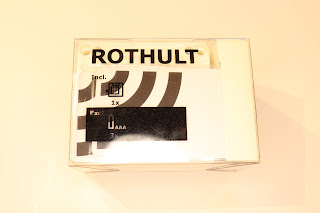 Things that the user can touch and manipulate, like potentiometer knobs, switches, and buttons, are sometimes called operators. This project had six operators per module and six modules. Each operator had two or three wires. This took a while just to get them wired up on the side of the device, not including connecting them to the junction board. 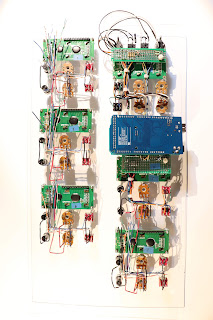 Operators with wires to junction board area

I spent another day wiring the loose wire ends to the junction boards, but it was more comfortable than the day before because it was a matter of repeating the same wire termination on the same board, not dealing with fiddly switch terminals at odd angles. 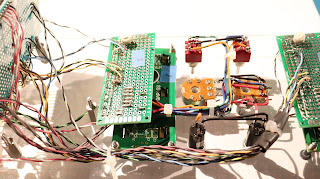 Controller switches and knobs wired to junction board

Wiring from the junction boards back to the controller took awhile because both ends of the wire were terminated at the same time. This increase in the number of solder joints per day was the result of being able to repeat similar tasks. 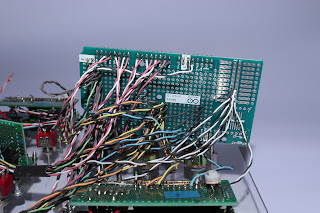 Junction board wires run back to the controller

All the wiring had some errors, which was to be expected. The screens were surprisingly low in mistakes, and it only took a day of troubleshooting and debugging to get all six working. The image below is a mix of two shots, one in low light so the screens are legible and the other in high light to show off the hardware. 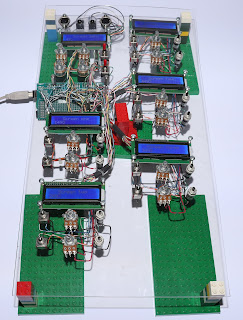