December 28, 2019
Hearing in my right ear is rubbish, and my left ear is worse. One time, I went for a hearing aid fitting, and they were so uncomfortable that in a couple of minutes, I realized  I was smiling less because that distorted my ear canal and caused discomfort. I wanted to make a bone-conduction hearing aid that more people could afford because those do not go in the ear. These already exist, but there are caveats. Also, these are different than cochlear implants. 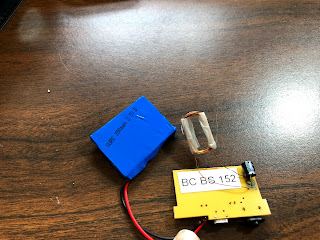 Making a coil for a hearing aid experiment


There are a couple of problems with a homemade hearing aid. The first problem is that bone-conduction hearing aids require surgery to mount an anchor to the cochlear bone. I implanted a magnet behind my right ear to try a substitute. The software and programming in hearing aids are involved. There are open-source projects, and if I could get any sound, I could look to them. In the end, I found it took too much power to drive a magnet below the skin. 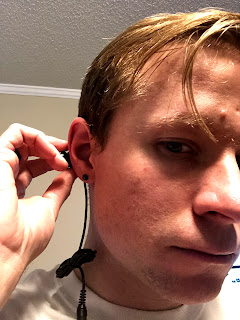 On the MIDIGlocken project, I still have some mechanical things to sort out. To start, there were crossed wires. Conductors were definitely backward when I connected the cord and solenoids. Wherever things were wrong, I decided I would switch everything in software to save work. If this were a product I hoped others would copy, I would put more effort into making it flawless so the code would follow.

The next problem was figuring out why one of the buttons would not show up in code. This button was connected to pin 13, which hosted the onboard LED. I ran out of spare inputs, so I desoldered the light, and my code worked peachily.

Now that I could trigger eight relays from eight buttons, I needed to figure out why the system would reset when I played a note. I feared that there was some nasty electromagnetic interference (EMI) coming off the solenoids, so I added flyback diodes across the magnet pins, and they operated politely. 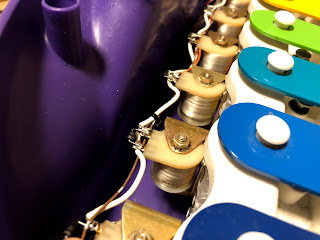 Some of the metal I glued to the keys was coming loose. Vibration and sudden pulling probably didn't agree with the adhesive. I pulled them off, some of them popped off without resistance, and drilled a hole in the top of the hangers and into the plastic keys. The hanger holes were expanded so I could add a #4 screw, which seems to be holding better than the glue. 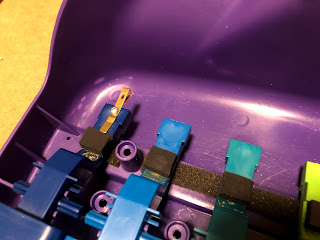