July 04, 2015
New week and a new project. This one is no less automated but the audience is different. This project is aimed at pet owners. Automated laser cat toys aren't new and aren't even that expensive but I wanted to try a method of laser pointing with the hopes of someday creating a monochrome laser projector for doing things like light graffiti. In the meantime I hope I can entertain my little cat. She is also endlessly entertained by bubbles in water so an air pump will also be part of the project.


If this little cat doesn't sell you on the project just imagine she is a pug. Pugs are popular

Deflecting a laser isn't difficult. I hope. The method I want to test is to attach permanent magnets to a small mirror then use Arduino controlled electromagnets to tug on those magnets and realign the mirror. Code was written which could control the brightness of LEDs to pseudo-random levels which should translate to pseudo-random levels of magnetism. With two axis this should point the laser all over in a crazy path.

Since these little electromagnets have cropped up a couple times in my projects and are likely to do so more in the future I dedicated a whole day on to how to salvage them from inexpensive relays.

With the electromagnets ready to be installed a 2-axis mirror rig was made. The simple explanation was a mirror was fastened at one corner on a flexible, but not easily compressible, joint. At the adjacent corners were magnets resting on easily compressible material, in this case, squishy fishing lures. Under the fishing lures and magnets the electromagnets were glued in place. This hacked together stage is not meant to be the final project, merely a way to test that electromagnets can realign a mirror reliably. Once it was proven that the mirror could be realigned a laser was pointed at it and it was shown that the dot did move. 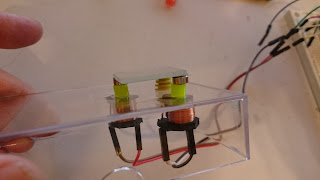 As a visual demonstration for CONvergence this year I made a magnetic demonstration box. The purpose was to show that a person with an implanted magnet could sense the orientation of two magnets and determine if they were arranged with the poles facing the same direction or opposite directions. It was a simple stunt with a simple premise to spark the minds of people and demonstrate how someone with an implant can sense something not noticeable to other people. 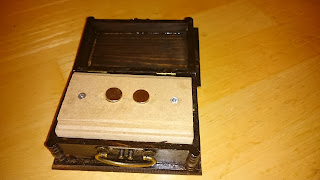