August 15, 2015
This week was mostly about programming. Go figure, this project is a customized computer keyboard with fresh software. Due to the program centricity I was glad to find an online service which allowed me to write Arduino code. Suitably, the service is called codebender. I would have been happy if the site had allowed me to write code and see the color coding while I wrote but codebender allowed me to upload to the boards directly from the web page. Not only that but they keep their drivers and plugin up to date so it's extremely useful. Code can be seen on the daily posts which reflects the work up to that day. An embedded window can show all the code to anyone who wishes to look but doesn't take up a lot of space for anyone who isn't concerned with unfinished code. A donation was made to codebender to promote the free service.

All the code being written was meant to emulate the information given by Greg Priest-Dorman on his Spiffchorder pages. As mentioned, this project was inspired by Gavin's own project which meant that copying the key chords was important so that anyone who can type with a Spiffchorder can type with my device.

On Tuesday an overhaul of the code took place which changed the programming direction drastically. Instead of blindly debugging code based on serial data at key presses an Arduino Micro has taken the place of the controller. The Micro can simultaneously output serial data and keyboard data with a single USB cable. Micros are at least three times more expensive than the Mini pro but implementing a keyboard was simple. 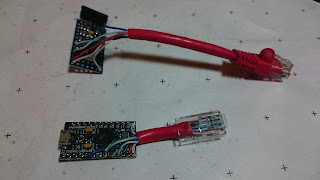 Arduino Mini Pro at the top and Arduino Micro at the bottom.
Both have had cords soldered in place

Some work was done in the physical world this week. Moving the keyboard from a concealed, or at least out of the way, location on the forearm up to the palm has been on my mind. Originally it was going to be moved on a linear slide, like a drawer slide, but those are heavy and overkill for this project. A cosplay prop of Assassin's Creed hidden blade was even considered as a way to move something from the forearm to palm. Smooth automated motion is important for this project since it will be used as a cyberpunk costuming prop as well as a functional keyboard.

Using a servo to simply crank the keyboard 180º from the forearm to the palm would work but it didn't capture the futuristic feel I wanted. Rotational motion is usually easier than linear motion if anyone is keeping track. It was actually a kid's movie where I got the inspiration I needed. A anthropomorphic super-spy wolf possessed an arm cannon, think Mega Man, which transformed from a bracer to a unit which encompassed his whole hand (paw). That cool futurist motion was what I wanted and with a four bar linkage it could be done with regular rotational servo motors.

Models were made which would mount the servos and use a threaded rod for a cross-member to hold them together. With the servos mounted a lever arm was also modeled which would attach securely to the servo horn while the other end would hinge on the keyboard. So long as the servos are connected the same same distance apart that the hinges on the keyboard are attached the parallelogram should be maintained. It may be necessary to employ four servos and use four lever arms to get the necessary rigidity.