April 06, 2019
Justin Atkin told me he was doing another microscope mod, so I jumped on the video and wrote a HaD article. This mod turns an entry-level scope into a fluorescence scope. The commercial versions of these scopes are thousands of dollars, but this hack costs less than ten dollars if you already have a camera and mount for your scope. 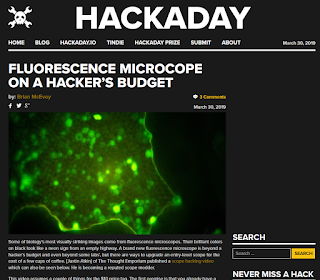 Fluorescence Microscope on a Hacker's Budget

Back on the Electronic Wind Chimes, the controller module was wired between the operators and junction board. Each module has a purpose, but the controller was unique from the other five because it had four analog inputs instead of two, and four digital inputs instead of six. This was the first to be wired, and since it was not like the rest, color coding for the wires was ignored to concentrate on the procedure. This was done this way to prove that the junction board was a practical method and learn any mistakes that were likely to come up later. 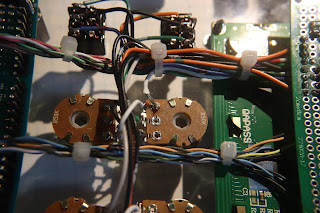 Module wired up and tidy

Wiring on the controller junction board encountered errors. In this case, there were supposed to be solder bridges between the incoming wires, pull-up resistors, and outgoing wires. Adding more solder was a simple task, but finding the issue required a continuity meter to discover where the break in the line occurred. 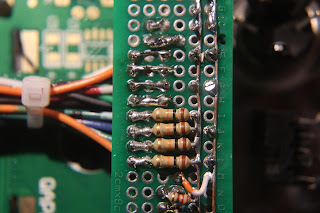 Wiring the screens always seemed to go better than wiring for the inputs. Half of the time, junction boards would operate the screen flawlessly on the first try, but there was always a problem, usually a missed solder bridge, with the inputs. The second screen was connected, and the LCD HelloWorld tutorial program was modified to display on two screens. I was delighted that the second screen worked immediately and independent of the first. 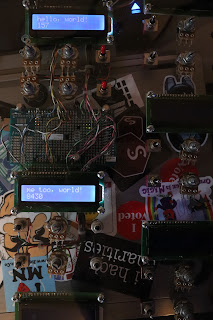 A secondary module was wired, and missing solder bridges continued to be the biggest problem but checking for them became the first place to look so they did not stay problems for long. Fortunately, adding a solder bridge is a simple task and troubleshooting these modules involved turning on the soldering iron immediately. There was a unique problem, one of the switches was wired backward, which also happened on the first version although this time, the issue was corrected. 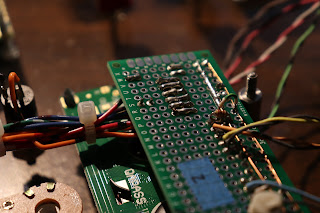 Now that a secondary module had been proven to work, the remaining four, which were identical, could be wired at the same time. All the work put into making five identical secondary modules was starting to pay off. When wiring could be duplicated, wires could all be cut at the same time to the same length, and later, troubleshooting was sometimes as simple as comparing one board to another that was supposed to be identical. 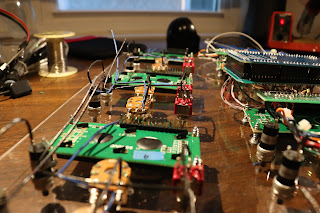